Sara Davies’ flower CSA is about to begin! Sara’s yard is filling up with burgeoning blossoms and the first bouquets will be delivered to members this week…if you’ve been meaning to sign up or check it out, here is the link to her website & info:                            Wild Child Flower Co.

What a glorious morning on the farm! After a few days of rain, though much needed and appreciated, it sure was lovely to awake to sunshine. The low mist still remaining above the distant hillside gave the farm an ethereal feel, and spirits were lifted by the blue skies, and promise of warmth later in the day.

We’re all sad to see the field of Buckwheat disappear….the blossoms are so lovely and the bees sure love them! But..it’s time to till it in and make way for the next crop. We plant Buckwheat as a cover crop as it supplies organic matter, and with its taproot, helps to break up compacted soils, and pull up nutrients from deep in the ground. We’ll be following with new strawberry plants and some late season crops. 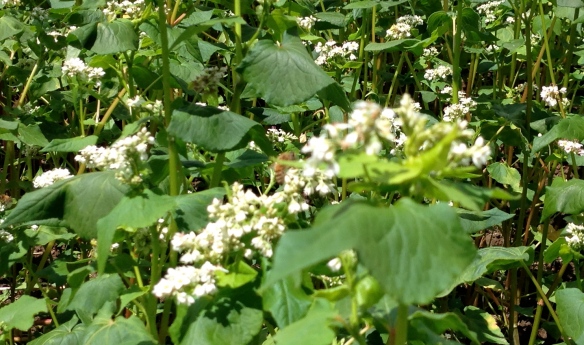 Look closely and you will see the bees busy in the blossoms!

We’re excited to tell you that your blueberries will be forthcoming next week! We’re working with a new grower this season….Blondie’s Blooms, Berries & Nursery located down in Creswell. Tonya Rager bought this 2 1/2 acre property in 2000, and opened as a nursery in 2002. She built a house, and her business through the years, purchasing another 5 acres to plant exclusively in blueberries in 2013. She plans to phase out of the nursery business in a few years. She is certified organic by Oregon Tilth.

Tonya has a history of family farming…her grandparents from her fathers’ side farmed 20 acres in Ohio, where she would visit in the summer. Her grandparents on her mother’s side raised Orchids in California. She is self taught in many areas, but feels that farming is in her blood. She attends 3 Lane County Farmers Markets in Eugene, and also sells her berries at the Red Barn Grocery in the Whiteaker neighborhood.

Since she is a smaller operation than the Sunset Valley Organics, who have been supplying our berries the last few years, we will stagger the delivery of the berry pints. The first pints will be in next week’s boxes, and then the second set of pints in the boxes the first week of August. Tonya thinks she could potentially supply enough bulk flats, and that would be the 3rd week of August…if you would like to reserve a flat, please let me know. If you want to make sure you receive a flat, or more, you might want to visit her at one of the markets earlier.

Earlier this season, I mentioned that we would like to profile some of our pioneering members, who have been receiving CSA shares for a long time…Paul Frishkoff is one of those members!

Paul and Pat Frishkoff of Eugene have been members since 1999. Formerly business professors (Paul, UO; Pat, OSU), they consult and keynote about succession in family owned business. Their then-teen son was going through a vegan phase (he still eats healthy, though not purely vegetarian), which impelled them to join. They like supporting a CSA, the weekly variety, and the camaraderie at the potlucks.

Paul shared this anecdote with us: One year, something pale and stringy appeared in the weekly box. The notes said that it was burdock, and suggested how to prepare. Paul brought the box home, and Pat enthusiastically soaked, peeled, and chopped it. Paul cooked it in a stir-fry. Pat said, “Not too bad,” which Paul chose to hear as “Very good.” Next week, more burdock; numerous others had discarded theirs in the yum-yuck box. Paul brought home about 20 of them. Pat: “I said that it was OK. One is plenty!” They gave the rest away to friends, and it has never to date reappeared in the box. (we stopped offering burdock in the weekly boxes in 2008….too much was coming back in the Yum-Yuck boxes, we think due to members not really knowing what to do with it!)

Paul is the author of Dr. Chuckle and Missed Her Ride (Amazon), a book of original puns and word bloopers. A few (copyrighted) veggie “definitions” from his forthcoming, yet-untitled follow-up:

Thanks for sharing, Paul! And, especially, thanks for your continued support through all of the years!

We hope you all have a wonderful week and enjoy your veggies this week!