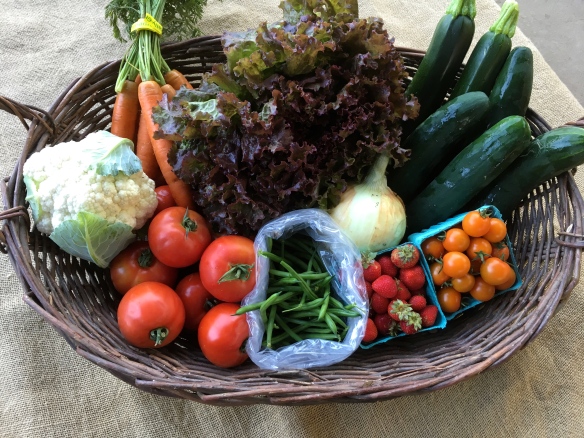 For some reason I have not been getting email notifications as usual when some of you post a comment on the Blog page, and I have not been very good at going to the Blog site to check on comments. I will try to be better about that, but if you have a special request or issue to resolve, please either call or email at the farm address to make sure we can respond in a timely manner. In  the meantime, WordPress and I are working on how to resolve the notification issue!

MID-WAY THROUGH THE STANDARD SEASON!

This is the 10th week of delivery and mid way through the Standard Season! We hope you’ve been enjoying the bounty so far….if you were on the fence about whether to continue on into the Late Season and have decided YES!, it’s a good time to let us know! 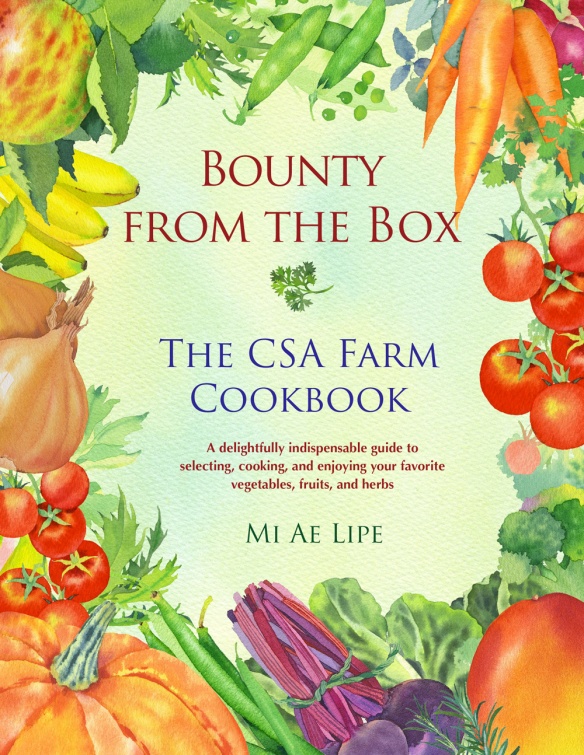 I just heard from Mi Ae Lipe today…she is the author of the fabulous “Bounty from the Box” cookbook, which was created especially for CSA members. She has created a 66-page, full-color guide called It’s in the Bag—or Not! She felt that many people waste food, and money, because they might not know how to properly store and prep their fruits and veggies. This guide gives details on how to store, trim, and clean 90 different crops. It is available as an electronic PDF file only (not a print hardcopy): https://bountyfromthebox.com/introducing-its-in-the-bag-or-not-storage-guide/  Mi Ae is also offering her cookbook with a sales promo code WGF15 from now until August 20, giving CSA members 15% off (a savings of $5.25) when you order the book directly from her website at http://www.bountyfromthebox.com/. I’ve included a couple of recipes from her book below for you this week!

Author Note: This is a different take on the savory potato pancake known as the latke, using sweet potatoes and carrots.

1. Combine the grated sweet potatoes and carrots, then add the cilantro, scallions, flour, eggs, ginger, salt, pepper, and cinnamon. Mix everything together until the mixture has a sticky but not gluey consistency. You may have to adjust the flour and egg quantities, depending on how big your eggs are.

2. Heat the oil in a deep 12-inch nonstick skillet over moderately high heat until hot but not smoking. Using a slotted spatula and working in batches of 4, spoon 2 tablespoons of the potato mixture per latke into the oil and flatten it to a 3-inch round. Reduce the heat to moderate and cook until golden, about 2 minutes on each side. Transfer the latkes to paper towels to drain.

3. Repeat until the batter is used up, adding more oil as needed. Remember to bring the oil back up to a fairly hot temperature before adding more latkes; if the oil isn’t hot enough, they’ll cook more slowly and soak up more oil.

4. If you plan to serve the latkes warm, shuttle them to a preheated 300°F oven. Serve with homemade applesauce!

Cooking Note: Start with a block of firm tofu; wrap it in several layers of paper towels and put it on a plate. Cover with a second plate and weigh the whole thing down using a couple of cans of food or a heavy book. Check it in 30 minutes and drain off the liquid. Repeat. Cut the tofu into 1-inch squares. Heat the oven to 400°F. If you’d like, season the cubes with soy sauce, salt, a bit of oil, or other seasonings. Bake for 30 to 40 minutes, or until the cubes are golden brown. Cool.

Arrange all of the ingredients on toothpicks and serve them on a platter. This is pretty and delicious as an appetizer, good with a vinaigrette dipping sauce. We sometimes make a whole meal of them. 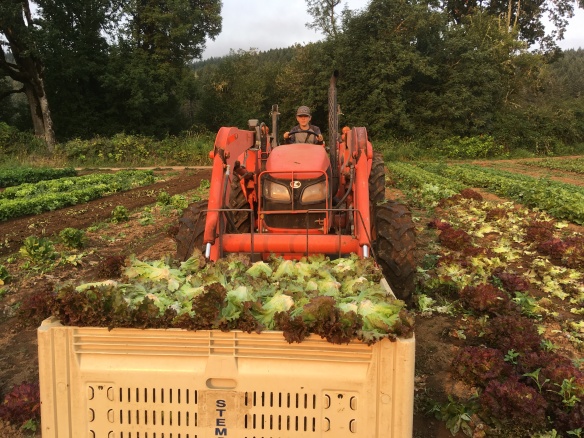 What a glorious day! Started out cool and overcast…just perfect for harvesting heat sensitive crops such as lettuce and strawberries, broccoli and cauliflower. Yes, that is 10 year old Porter driving the Kubota tractor, helping Mom and Pop Overbaugh harvest the lettuce! Won’t be long before he is taking over the farm. He expects to have some of his melons to our farmers market stands soon. 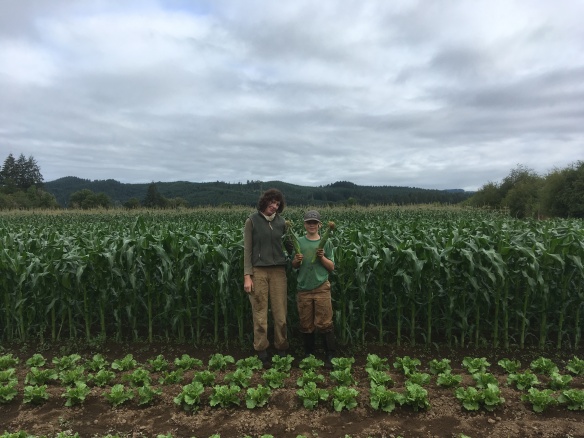 On the way back from the lettuce harvest, Shannon and Porter stopped to take a look at the corn. The first planting is almost ready and we should be including it in your boxes in the next couple of weeks….can’t wait to eat those delicious succulent ears! 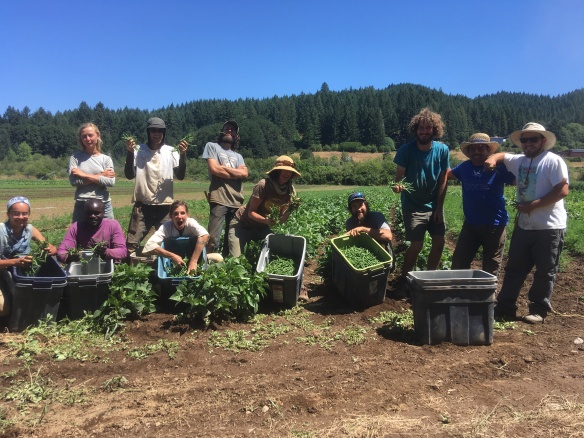 Green Beans and Strawberries are our most time consuming crops to harvest. The crew does manage to stay in great spirits through out though, and loves any excuse to get silly.

We’re so lucky this year because the showers will be occurring during the New Moon phase, giving us a dark sky to see the Meteor shower in all of its glory.

No matter where you live worldwide, the 2018 Perseid meteor shower will probably produce the greatest number of meteors on the mornings of August 11, 12 and 13. In a dark, moonless sky, this annual shower often produces 50 or more meteors per hour. And this year, in 2018, there will be no moonlight to ruin the show.

According to EarthSky people tend to focus on the peak mornings of the shower and that’s entirely appropriate. But meteors in annual showers – which come from streams of debris left behind in space by comets – typically last weeks, not days. Perseid meteors have been streaking across our skies since around July 17. We’ll see Perseids for 10 days or so after the peak mornings on August 11, 12 and 13. What’s more, the Perseids tend to build up gradually, yet fall off rapidly. So it’s often wise to watch in the couple of weeks prior to the peak … but not this year. No matter how many meteors you see, you might see something, and it might be a lot of fun.

Every year, from around July 17 to August 24, our planet Earth crosses the orbital path of Comet Swift-Tuttle, the parent of the Perseid meteor shower. Debris from this comet litters the comet’s orbit, but we don’t really get into the thick of the comet rubble until after the first week of August. The bits and pieces from Comet Swift-Tuttle slam into the Earth’s upper atmosphere at some 130,000 miles (210,000 km) per hour, lighting up the nighttime with fast-moving Perseid meteors.

If our planet happens to pass through an unusually dense clump of meteoroids – comet rubble – we’ll see an elevated number of meteors. We can always hope!

Comet Swift-Tuttle has a very eccentric – oblong – orbit that takes this comet outside the orbit of Pluto when farthest from the sun, and inside the Earth’s orbit when closest to the sun. It orbits the sun in a period of about 133 years. Every time this comet passes through the inner solar system, the sun warms and softens up the ices in the comet, causing it to release fresh comet material into its orbital stream.

Comet Swift-Tuttle last reached perihelion – closest point to the sun – in December 1992 and will do so next in July 2126.

However, this is a chance alignment of the meteor shower radiant with the constellation Perseus. The stars in Perseus are light-years distant while these meteors burn up about 100 kilometers (60 miles) above the Earth’s surface. If any meteor survives its fiery plunge to hit the ground intact, the remaining portion is called a meteorite. Few – if any – meteors in meteor showers become meteorites, however, because of the flimsy nature of comet debris. Most meteorites are the remains of asteroids.

In ancient Greek star lore, Perseus is the son of the god Zeus and the mortal Danae. It is said that the Perseid shower commemorates the time when Zeus visited Danae, the mother of Perseus, in a shower of gold.

All of this, along your veggies, should make it quite a wonderful week…hope you enjoy!