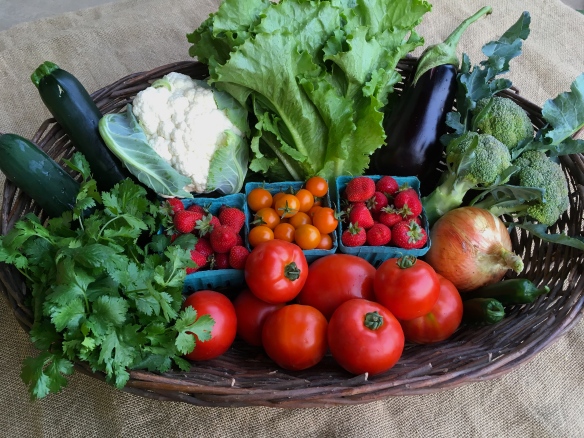 Salsa Box!! We like to let you know so you can keep little fingers out of the box as there will be jalapeño peppers included.

We’re excited for a cooler week, although the smoke has definitely found the farm. While we’re not as inundated as Eugene or other areas, we’re feeling it in the air for sure. What a full morning circle! We’re also excited for our new crew members, Mary and Matthew! We have been short handed for a while now, and especially through those couple of weeks when the temps were consistently over 90 degrees, the work was tedious and the days were very long. More hands make for lighter work is a true idiom, and we’re experiencing the relief of those extra hands today. 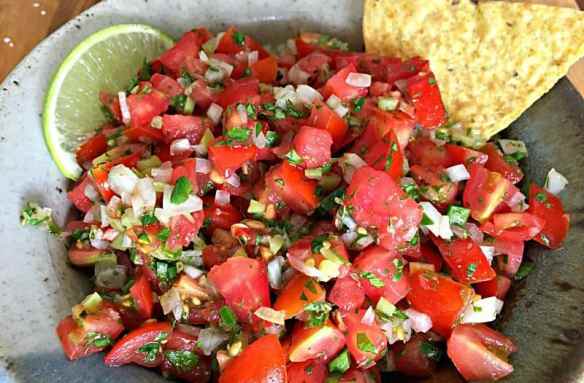 Salsa Box! We love this time of year…since I’m not out there harvesting anymore, I love when my walks up to the barn area coincide with the arrival of the harvest truck full of bins of pungent cilantro, and close proximity to wandering crew who trail a waft of cilantro scent everywhere they go. Cilantro is one of those herbs that you either love or hate. In fact, I recently heard a TedTalk on NPR radio about the Five Senses that said that our love of, or aversion to Cilantro is not random.  It’s actually based on genes.

I have included several fresh tomato salsa recipes, and there are more on our archive of past blogs, and old box notes on our website. We hope that one of them suits your fancy.

Salsa is the Spanish word for sauce, but the food predates the Spaniards by many centuries.The history of Salsa sauce originated with the Inca people. Salsa (combination of chilies, tomatoes and other spices) can be traced to the Aztecs, Mayans and Incas. The Spaniards first encountered tomatoes after their conquest of Mexico in 1519-1521, which marked the beginning of the history of Salsa sauce. Aztec lords combined tomatoes with chili peppers, ground squash seeds and consumed them mainly as a condiment served on turkey, venison, lobster, and fish. This combination was subsequently called salsa by Alonso de Molina in 1571.

Breakfast for the bumble bees

According to the hot sauce history, salsa manufacturing in Texas began in 1947 with David and Margaret Pace and their picante sauce. The Pace family made their name producing cane molasses in Alexandria, Louisiana. After serving as a pilot during World War II, David Pace moved to San Antonio, Texas and began manufacturing syrup, along with a few other foods like jam, salad dressing, pickles, and salsa. Pace loved his chile salsa so much that he decided to jettison all other products and focus on that alone. He called it Pace Picante, and today it’s still one of the country’s top-selling salsa labels.

In 1952, La Victoria Foods introduced the first commercial taco sauce in US and in 1955, La Preferida launched a line of salsas.

In 1975, Patti Swidler of Arizona launched Desert Rose Salsa. Four years later, in Austin (Texas), Dan Jardine began producing Jardine’s commercial salsa, giving Austin the reputation in the history of Salsa Sauce as the hot sauce capital of America. Another Texas company, the El Paso Chili Company, was started in 1980 by Norma and W. Park Kerr. In 1986, Miguel’s Stowe Away in Vermont launched a salsa line and in April, 1986, Sauces & Salsas Ltd. began manufacturing the Montezuma brand of hot pepper sauces and salsas in Ohio.

Between 1985 and 1990, Mexican sauce sales grew seventy-nine percent; between 1988 and 1992, the percentage of American households buying salsa increased from 16 to 36. By 1992, the top eight salsa manufacturers in the history of salsa sauce were Pace, Old El Paso, Frito-Lay, Chi-Chi’s, La Victoria, Ortega, Herdez, and Newman’s Own. By 1993, competition from smaller salsa companies was so fierce that Pace, Old El Paso, and six other brands saw Texas sales decline three percent.

The big news in 1994 was the buy out of two of the largest companies in the Fiery Foods Industry. Numero Uno salsa manufacturer, Pace Foods, was sold to Campbell Soup Company for an astronomical USD1.1 billion. 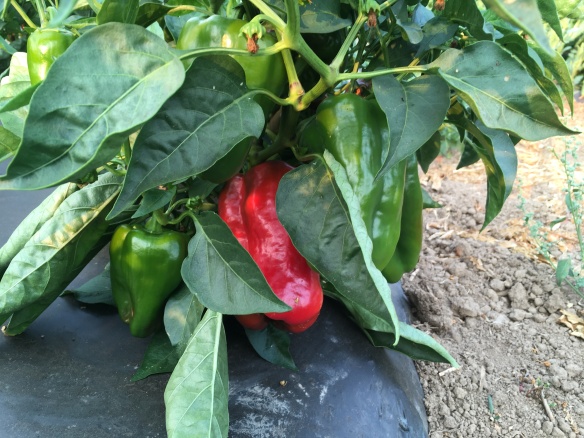 Peppers are ripening up

There are a variety of different kinds of salsas. Some of the more popular ones include:

We hope that you enjoy your Salsa box….let us know how your recipes turn out!